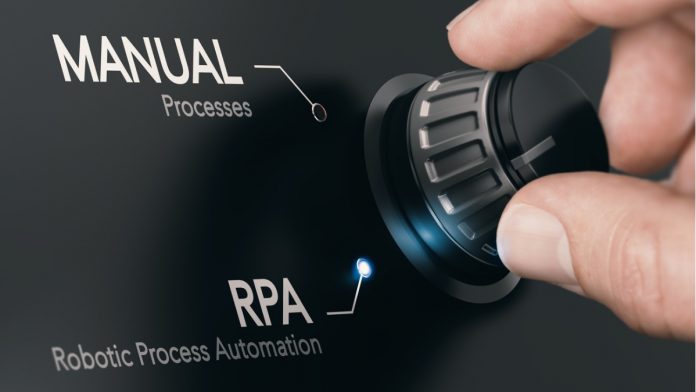 Digital transformation, driven by the search for optimal efficiency and competitiveness, is underway in virtually every industry. Vadim Tabakman, Director of Technical Evangelism at Nintex, explains that two of the challenges businesses face as they digitally transform their operations are connecting legacy systems and automating manual tasks. Robotic process automation (RPA) may be the technology companies need to overcome these challenges and advance their business goals.

“Since there are many factors in digital transformation, moving over to new, more efficient systems from older legacy systems has been key to improving the overall efficiency of a business, Tabakman says. “Getting data from those older systems to newer ones requires a lot of manual work, as older systems generally don’t have APIs you can call. RPA allows you to build bots to automate that transfer of data.”

“Another push driving for RPA adoption is to minimize repetitive work and automate it, allowing employees to focus on revenue-generating work,” he says.

Tabakman points out, “There is unlikely to be a new system out there that does everything you need. RPA can help to integrate several systems to work together.”

For developers to be successful with RPA projects, Tabakman offers three key pieces of advice:

Tabakman says one of the biggest challenges you’ll face with RPA is understanding the processes you need to automate.

“Most companies don’t really know what their processes are, even when they think they do. Ask ten different people at one company what their leave request process is, and you’ll likely get ten different answers,” he comments. “It is extremely important to understand and map out those processes, before venturing into RPA.  Otherwise, there will be constant change requests.”

Tabakman advises developers working with companies that are automating processes with RPA to establish effective communication throughout the process. “Although companies should be looking at continuous process improvement and optimization, they need to minimize this by understanding and agreeing upon the process before venturing into automation.”

He adds that it is also important to not tackle the biggest process first. “Instead, start small before venturing into the bigger, more-complex processes,” he says. “The bigger the process, the more edge cases could appear that will break your RPA process.”

2Focus on Key Verticals and Roles

If you’re wondering where to focus your sales team for RPA projects, Tabakman shares his insights on which verticals have the highest rate of adoption and who crucial decision-makers are.

“Banking and finance have been adopting RPA at a faster rate than most, due to the overall number of documents and forms they need to process and the different systems that the data needs to go through,” he says. “Having someone do this manually, when it can be achieved quite faster with a bot, is a no-brainer for banking and finance companies.”

Regardless of vertical, he says buy-in from the CIO/CTO for RPA projects is pivotal. He adds that for a successful project, however, “In order to understand what needs to be automated, subject matter experts in each department need to be presented with automation as an option. It is critical to explain the how the advantages outweigh the disadvantages, and that the aim of RPA, is not to minimize workforce, but to streamline their work and make them even more valuable to the business.”

3Make Sure RPA is the Right Tool for the Job

Tabakman reminds developers that RPA is just one tool in your arsenal, and it isn’t always the optimal choice. For example, in many RPA projects, bots interact with the desktop and take over the mouse and keyboard. “The bots rely on certain things to be there and in a certain way. If anything changes, the RPA bot fails,” he says. “This may be okay when those user interfaces don’t change often, but it’s something to be aware of. If a UI changes often, then maybe RPA is not the right tool for that job unless you can build some complex logic into it.”

“While RPA can automate some things, more development may be the right tool for other things. When it comes to using RPA, do not go with the adage ‘when you have a hammer, everything looks like a nail,’” he says.

6 Tips for Protecting Your Retail Customers from Cyberthreats